Batanes and the God of Wonders Part 1

“The heavens declare the glory of God;
the skies proclaim the work of his hands.” (Psalm 19:1 NIV)

After experiencing a very hot weather for the past several months, it started raining again in Manila. The weather bureau predicted that the rainy season will start next month. It’s a good thing that I got a chance to travel to an island in the Northern part of Luzon prior to the typhoon season. Of all the places I have visited so far, I can say that this is one of the best in terms of breathtaking views and scenery (Coron, Palawan is my other favorite). I am talking about no other than the island of Batanes.

I stayed in the island for 4 days and 3 nights (May 29-June 1, 2010) so this post will be the 1st of the series of blogs about this adventure. I can think of so many things to write about (the itinerary, the food, the culture/people and the accommodation) but I will try to finish everything in 4 parts.

Jaja and I bought the airline ticket as part of the SEAIR promo in a travel expo in SMX back in February. The deal was buy one take one so we booked it even with hesitations not knowing if we can really travel at the specified dates. On board a 30-seater Dornier plane via SEAIR, we left Manila at 8AM last May 29. The flight was 10 minutes ahead of schedule and we arrived in the Basco, Batanes airport almost 30 minutes ahead of the estimated arrival. We were picked up by our hotel service and arrived at Hiro’s Cafe at 10AM. Our contact there is Ms. Lydia (contact number 0915-940-4823). She was very accommodating and since our rooms are not yet ready because of the earlier arrival, she offered brunch for free. We had Tocilog as our first meal in the island.

After the meal, we went to Batanes Seaside Lodge and Restaurant (just 5 minutes away from Hiro’s cafe) for our standard check-in. Given that there’s only 2 of us and the usual rate for accommodation with tours caters to at least a group of 4, we got a real good deal at Php6,000/pax inclusive of room and board, full board meals, island tours and hotel transfers. At noon, we went back to Hiro’s cafe for our lunch. I thought it will just be another meal but to my surprise; they served lobsters, steamed lapu-lapu and more. The meals were served ala carte but the servings are really generous. I thought that this is just the hotel’s way of welcoming guests on the 1st day and then regular meals will be served afterward but I was totally wrong. I will write a full account of the food/cuisine in Batanes with some pictures probably next week. Let’s proceed to our Day 1 itinerary.

After lunch, we were introduced to the rest of the group that will be part of our tour. We have met Rachel and Anne plus the Castro Family (Ishi and her parents Mon and Millie).

We rode a jeepney and went towards the North of Basco at the Department of Agrarian Reform Beneficiary land, overlooking the rocky beach of Chadpidan, facing northen Island towards Taipei viewing the pastureland of the Ivatan Folks. The first stop was what they called the “Rolling Hills” wherein the ridges at the boundaries are with similarities to the pasture land of Holland.

We then went to a beach with very large rock formations. The place is not suitable for swimming because of strong waves but a great view for photo shoot and our local tour guide Nelson calls the place “border/boulder beach”. I never had a chancee to confirm which is correct. I am still waiting for some more pictures from my friend but here’s a mono view of the place courtesy of Ironwulf.net. 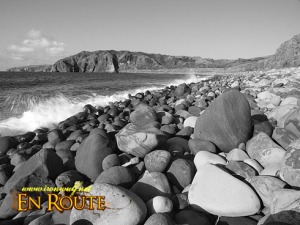 The last stop for Day 1 was the Light House in Basco with breath taking view on its surroundings. We were supposed to go to Chanpan Fishing Village in Valugan (facing the Pacific Ocean) but it started raining and we had to walk around 1 kilomoter, the group decided to finish the tour at the lighthouse. We tried to climb the lighthouse to take some more pictures on top but the windows are closed because of strong winds. The tour guide assured us that there’s nothing to be disappointed about because Day 1 is just the beginning of what Batanes has to offer and there’s a lot more to come. He is exactly right. In the next posts, I will write about our trip to Sabtang Island and it’s unique Ivatan Homes; our visit to the Honesty store and to a grazing land popularly known as Marlboro Country and more.

As I look back in my recent trip, I can’t help but thank God for His marvelous works. The song by Third Day that was also performed by Chris Tomlin (he just visited Manila last month) entitled “God of Wonders” speaks of God’s holiness and majesty through His creations. He is indeed the Lord of heaven and earth; the Lord of Ivatans and the small but awesome island called Batanes!